I don’t know about you, but Pinterest has opened up my world. Many a winter evening was spent scanning through pin after colorful garden pin in search of inspiration for DIY ideas on garden beds, specific plants, pots, potting benches, fences, fertilizer, seed starting and more. The list goes on.  With “Piddling Season” quickly coming to an end and the garden beginning to emerge, I thought, what the heck, let’s give one or two of them a try.

I’ve always shied away from starting seed indoors. Mostly, I don’t have a lot of indoor space and second, I don’t really have any equipment, such as a grow light. But every year after my fourth or fifth visit to the garden nursery, I tell myself that I’m going to save some money by starting seeds. But I never do.

This year is different. I was given some seed packets…

And so it begins. A carton of eggshells fits my space limitations. My family room has lots of windows so I think I have plenty of light. By starting small, I may just get a taste of success.

While I have direct sewn lettuce, broccoli and spinach outside, I’m using eggshells indoors to start spinach, broccoli, basil and geranium seed. Apparently, you can plant the whole kit and caboodle; no need to discard the shell.  Using a Sharpee, I marked each shell with the type of seed planted. Doing this experiment takes me back in time to 4th grade science experiments.  Clearly, I’ve matured because I didn’t hate doing this.

Here’s the recipe for success:

Boil the eggshells to clean and sterilize. This only take a few minue. Then, punch a small hole in the bottom of the shell for dranage.

Next, fill with seed starting material. I used potting soil. 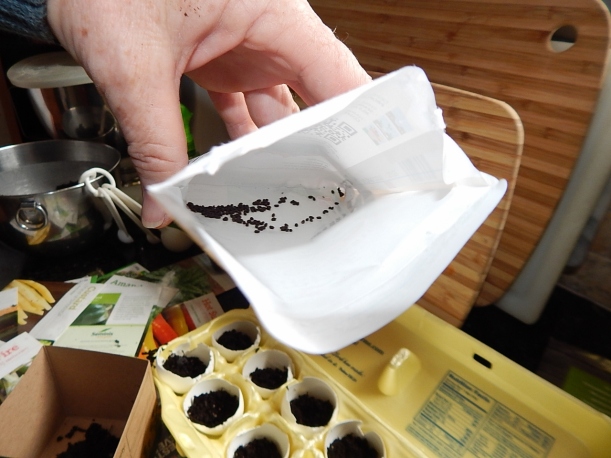 Mist to thoroughly moisten the material. I mist daily. 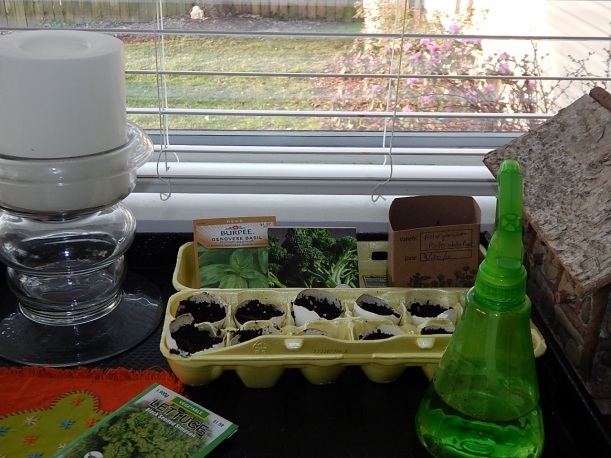 Place in a sunny window.

My Pinterest experiments won’t stop at eggshell seed starting. There’s a plethora of pins on using Epsom salts to boost plant growth. I need to research which plants like magnesium and sulfate, which, apparently is what Epsom salts are.  And then there’s coffee grounds. My research on coffee grounds tells me not to put them directly into the garden as is sometimes extolled on Pinterest. They should be put into the compost pile because alone they are too acidic. And although I have seen lots and lots of pins extolling the virtues of burying banana peels in the garden by the roses, I’m not sure I’ll try that one either.

What Pinterest tricks have you tried in your garden? 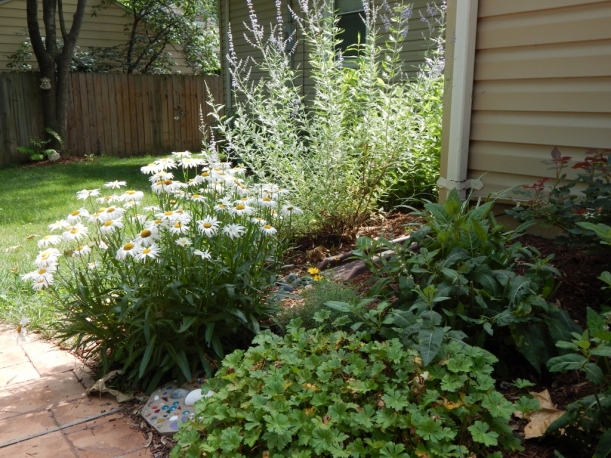 What does your garden landscape say about sustainability? This is something I am thinking of more frequently for a few reasons: to protect the watershed, to reduce/maximize resource use and reduce expenses. As I began creating my backyard garden, my focus was on installation of low-maintenance plants and shrubs, with an emphasis on shrubs suitable for the conditions in plant hardiness zone 6a/6b. With that in mind I selected plants that are drought tolerant and some natives.

Sustainability–and I am really not crazy about this word…it feels kind of like the buzz-word-of-the-day to me–has always been in the back of my mind, however. I have spent considerable time researching rain barrels since I began my yard improvement efforts and plan to put in two or three barrels this year. And If you would have asked me three years ago if I would be composting, I would have resolutely said, “No.” 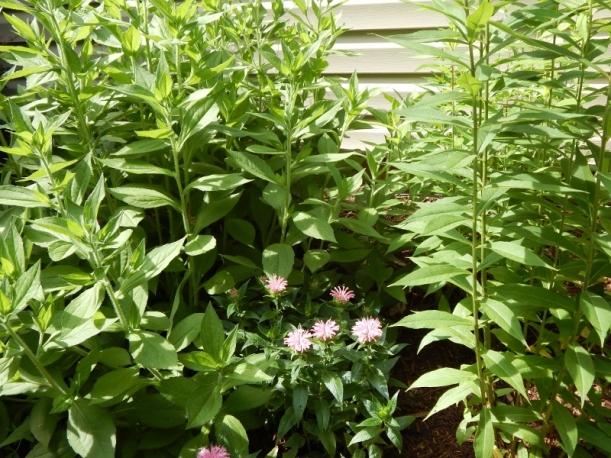 The young beebalm “Pardon My Pink” is dwarfed by black-eyed Susan on the left and tall garden phlox on the right.

I had tried composting at the old house when the kids were little and I had very little time to devote to the garden or yard, other than to pick up the toys before we mowed or move the hose. With a pallet as my base, I constructed a container in an out-of-the-way corner in the yard using heavy gauge wire. I put PVC pipe that we drilled holes in into the center of the compost and dumped in the leaves from the stately oaks, dogwoods and maples that freely dropped mountains of leaves in the fall and when I thought of it some grass clippings. I watered it now and then and really just forgot about it…for a few years, actually. I don’t think I turned it more than once or twice a year. It seemed the most attention it received was in the fall when I filled it up with new leaves.

One day a few years later, I noticed it had reduced to a pile of, well, dirt. The next spring I added the composted material to the dry shade area of the yard where I was coaxing hostas to grow with some limited success. And what a difference it made! Truly.That corner of the yard that year was lovely and I attribute it to the compost.

But I did not become a compost convert.

Honestly, I don’t really think I was doing it right. I mean, it took years for the stuff to break down. But like the bees I am trying to attract with my perennial selections (or maybe it’s the murmurings of my 20-year-old daughter in my ear), the idea of composting is buzzing in the back of my head. The benefits are many from putting nutrients back in the soil to reducing waste and reducing fertilizers. And, my oh my, there are lots of products out there for the backyard enthusiast.

Pinterest posts lead me to believe composting is Not a Big Deal. When I read about putting a banana peel in the soil by the rose bushes, I think, “Now THAT’S the lazy man’s compost!” Or putting a whole egg in the bottom of a container to feed the plants throughout the season. Do these natural tips really work? I don’t fancy myself as lazy, more like time pressed, and I do like a short cut or two. But I don’t think I will be burying banana peels in the rose beds any time soon.

My only true reservation at this juncture is where to place a composter. I envision buying one that has a crank where you can turn the bin. Unlike my last address, I have very limited space and, frankly, I think the compost bins on the market are hunky, clunky and ugly. I don’t want it up next to the house. Last fall, I put in three leatherleaf viburnum and moved some azalea to the front of a wedge-shaped area that behind it is very shady and often wet and I’ve had difficulty getting much to grow there. I did this with the idea that the viburnum will grow tall create a nice screen for something like a compost bin or even some of the garden essentials, such as the wheel barrow, that don’t fit into my one-car garage.

Let’s hope the viburnum are in the right place because the buzzing from my 20-year-old makes me think a kitchen composter is in my future for Mother’s Day.